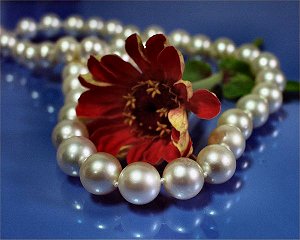 Two varieties of Pinctada maxima produce the South Sea pearls: the silver-lipped and the gold-lipped.The colour of the outer edge of their interior distinguishes the one from the other. Their shell, also called mother-of-pearl is responsible for the tint of the cultured pearls produced.

The South Sea pearl is harvested - as the name suggests - in the South Sea, an area located between the northern coast of Australia and the southern coast of China. Here she resides, Pinctada Maxima, the large oyster. Growing up to 12 inches in diameter, this species hosts very big pearls, their average size being 13mm. Most harvests are producing a range of sizes from 9mm up to 20mm. The big oyster can be nucleated with much larger beads than her other saltwater cousins, the Akoya oyster for example. But - unlike the Akoya oyster, the South Sea oyster will only accept one nucleation at a time. The pearl farmer has to be patient, until his oysters allows another nucleation, about 3 in the course of several years. The incision takes place when the oyster is approximately 24 months old, half developed, with a size between 4.7 to 6.7 inches. 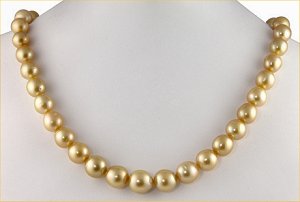 The remarkable size of Pinctada Maxima though, rewards the pearl farmer with extraordinarily large gems. The large bead it can host, the space it provides for huge pearls to grow inside, the length of time it is left to produce and the oysters environment are the four reasons responsible for striking results.

The gonad of the Pinctada Maxima is several times larger than the reproductive organ of the Akoya oyster. Due to this fact, the South Sea oyster is able to deposit layers of nacre around the nucleus much faster. Warm water, a merit of the South Sea, enhances the oyster’s metabolism. The South Seas are extremely clean, not suffering from pollution and, what a blessing, are filled with plankton, Pinctada maxima’s favourite nourishment. Even though all of these circumstances increase the production of nacre, the growth period for South Sea pearls is substantially longer than that of the Akoya pearl. An Akoya can be harvested after 9-16 months, while a South Sea pearl needs at least 2 years until it is brought to the surface. 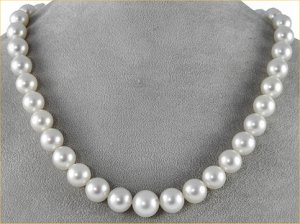 Several distinct characteristics are unique to this gem. South Sea pearls show a thick nacre, as generous as 2-6 mm, while Akoya’s develop a nacre thickness of 0.35 to 0.7mm. The rapidly deposited nacre of the South Sea pearl amazes with a special, satin-finished lustre. They are available in a soft array of colours, typically white, silver, and golden, shades that are hard to find in other types of pearls. 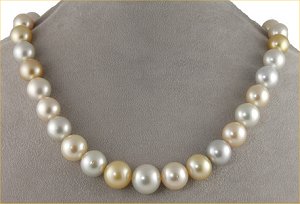