prices include VAT, and P&P
Cultivation of those charming pearls dates back until the 13th century. The famous Japanese 'Biwa' pearls used to control the industry from 1924 until well into the 70's. The Biwa Lake in Japan, like so many others, became a victim of environmental pollution caused by adjoining factories and urban sprawl. The extensive freshwater pearl production in the waters of Lake Biwa came to an end.
China started its freshwater pearl production just before 1970. Over the years, a more and more remarkable quality was achived. Today chinese freshwater cultured pearls dominate the market.
"Hyriopsis schlegeli" is the most commonly used mussel for freshwater pearl cultivation, belonging to the species of Unionides. The outer shell an ordinary brown, the inside yet a glossy white. The maximum size of this mussel may reach 30 x 20 cm. Freshwater cultured pearls, contrary to saltwater cultured pearls, do not contain a mother of pearl nucleus. Pearls exceeding a size of 8mm are an exception. One mussel can be implemented with 20 to 60 implants to grow freshwater pearls. After approximately one and a-half years have passed, the pearls have grown to a size of 3mm. After three years, sizes of 7mm are possible. A larger size can be achieved only, if the mussel remains untouched for more than 4 years.
Freshwater cultured pearls appear in a wide range of colours: white, off-white, champagne, shades of pink and orange, purple, mauve, silver and brown. Their unique shapes cover oval, ovate, button-shaped, and drop shaped. Some show a stunning similarity to potatoes. A beautiful pearl necklace with perfectly round, large freshwater cultured pearls are a rare gem. 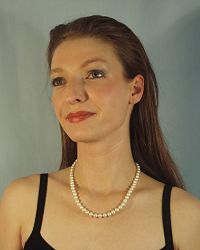